Product How it works Device Methodology F.A.Q. Blog
Feedback. How I Prepared and Recovered for the Half Marathon with Engy Health
Back

Three years ago I was actively involved in triathlon. During this time, I overcame Ironman and Norseman and got certified as a trainer. Here's how I adjust my training load with Engy Health.

My name is Anatoly Leskovets. I work as the head of software development at an IT company John Wiley & Sons in New Jersey. Three years ago I was actively involved in triathlon. During this time, I overcame Ironman and Norseman (triathlon in extreme conditions of Norwegian nature), and also became certified as an Ironman trainer and began to train students at ILoveSupersport school. I am sharing my experience of how I adjust my training load with Engy Health and how it affects my athletic performance. 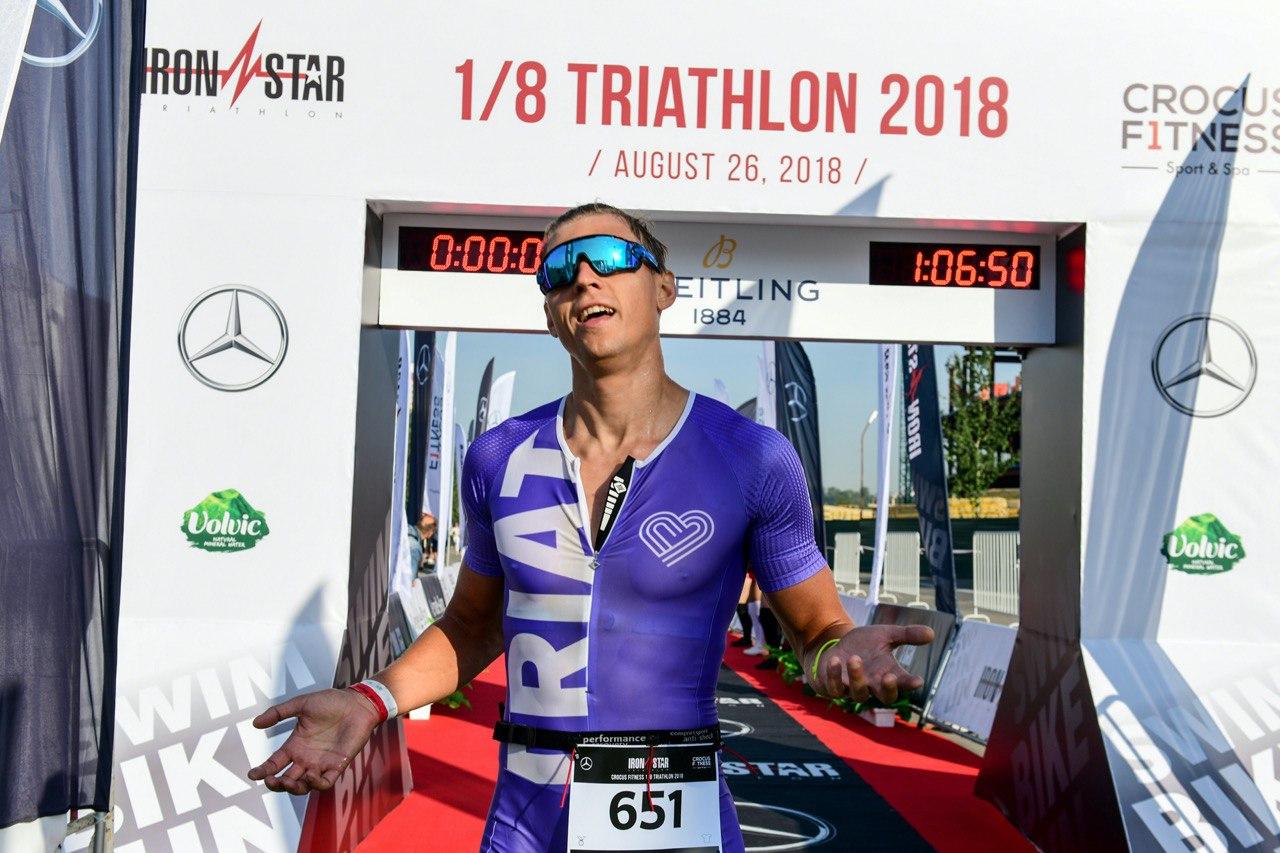 How I learned about heart rate variability

Working in IT is intellectually stressful work. Initially, I started playing sports in order to balance the intellectual load with physical activity. Gradually my life began to fill more and more with sports.

However, sport is also a burden. Against the background of stress in all other areas of life - at work, in the family, in other hobbies - you need to be able to organically integrate sport into your life and find a balance. Therefore, it is important to monitor the state of the body in order to accurately determine the level of load: it is just that the “self-perception” of one's state is often either deceptive or signaling failures too late, when a breakdown has already occurred.

When you become the coach of a triathletes team, the task becomes more difficult. It is one thing to study and feel the reaction of your body to the load, and it is quite another to explain this to the student, monitor his condition and be responsible for his health. I began to look for methods and services that help to monitor and analyze the results remotely and professionally, with a physiological approach. Heart rate variability (HRV) classes are popular in the United States among professional teams and athletes. Athletes actively share their HRV indicators in sports forums. I began to study this method, and at the stage of immersion in the method I got to know Engy Health. 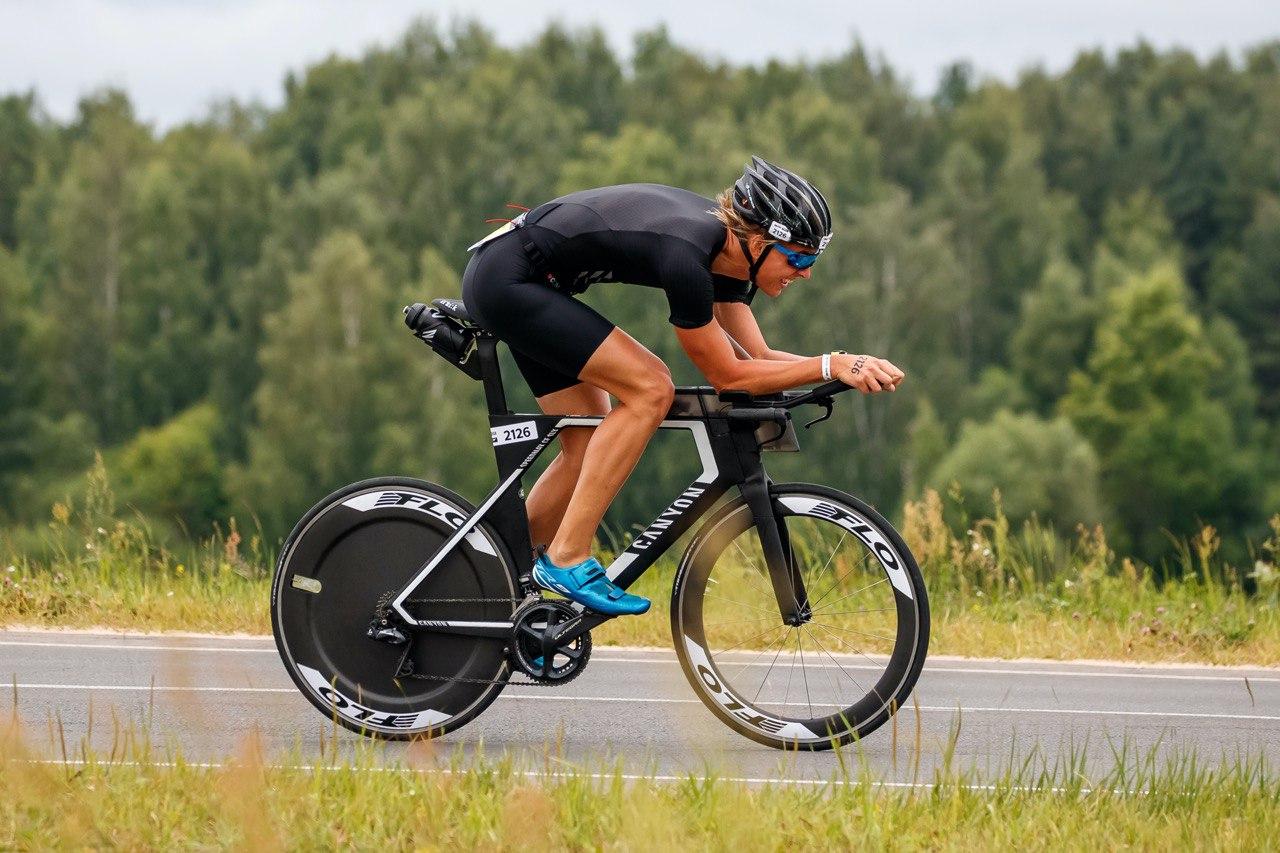 How I use Engy Health

I track the relationship between my exercise level and heart rate, RMSSD and CV.

According to the methodology, an upward trend in RMSSD reflects the recovery of the body, while a downward trend indicates an overstrain of the body. In the case of the training process, the load must be adjusted in such a way that the RMSSD grows or is stable as the load increases. I see a clear correlation between myself and my students between the loads and the RMSSD indicator: with an optimally matched load, the RMSSD grows or is stable, and after difficult RMSSD races, it "falls through", indicating depletion of the body. You can start a new training cycle only after the RMSSD is restored to the individual norm, and Engy Health clearly indicates this point. 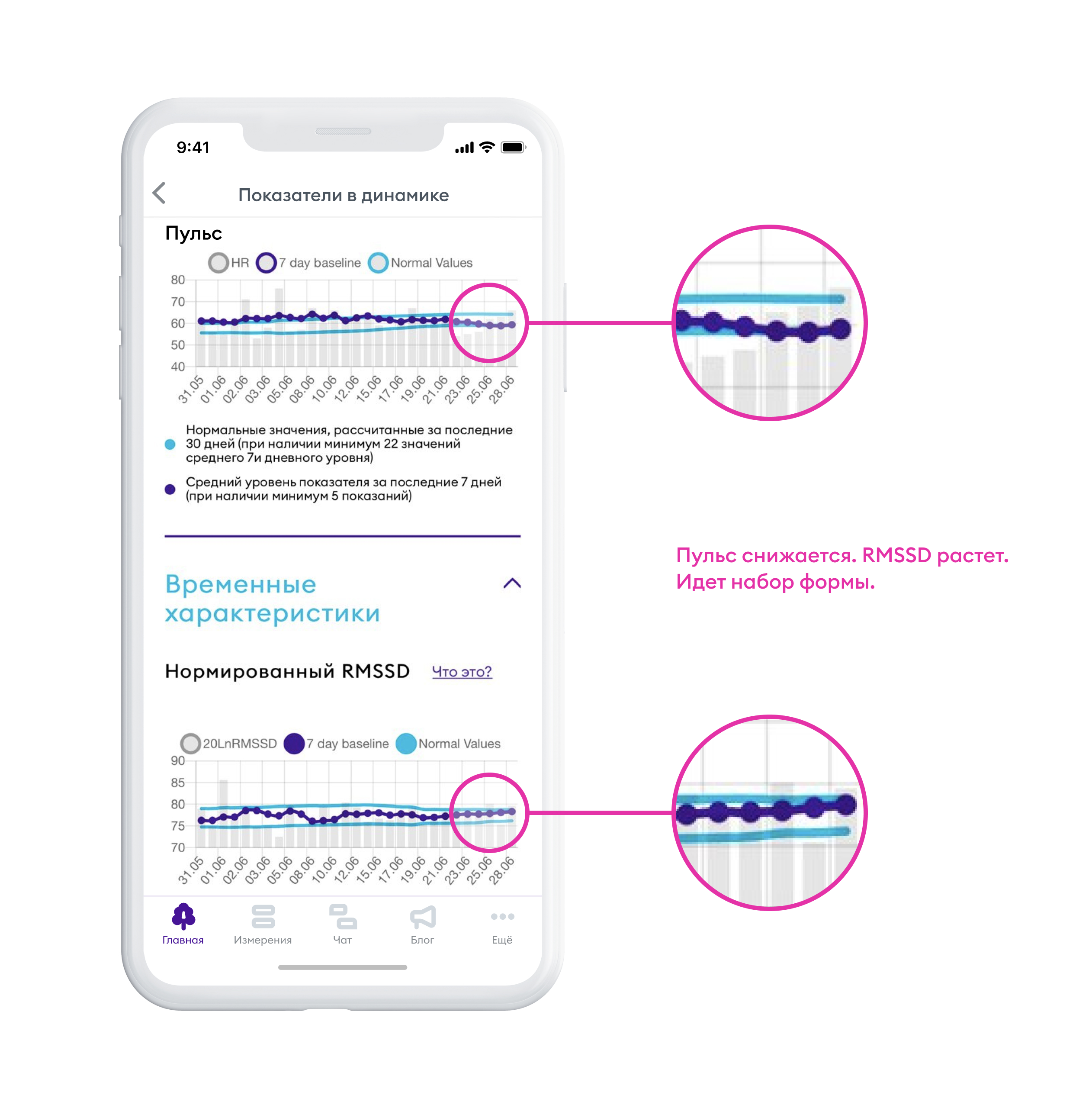 Another metric that I keep track of is CV - RMSSD spread. It indicates the stability of the RMSSD trend. The athlete must be stabilized. The lower the CV, that is, the RMSSD spread, the more stabilized you are. 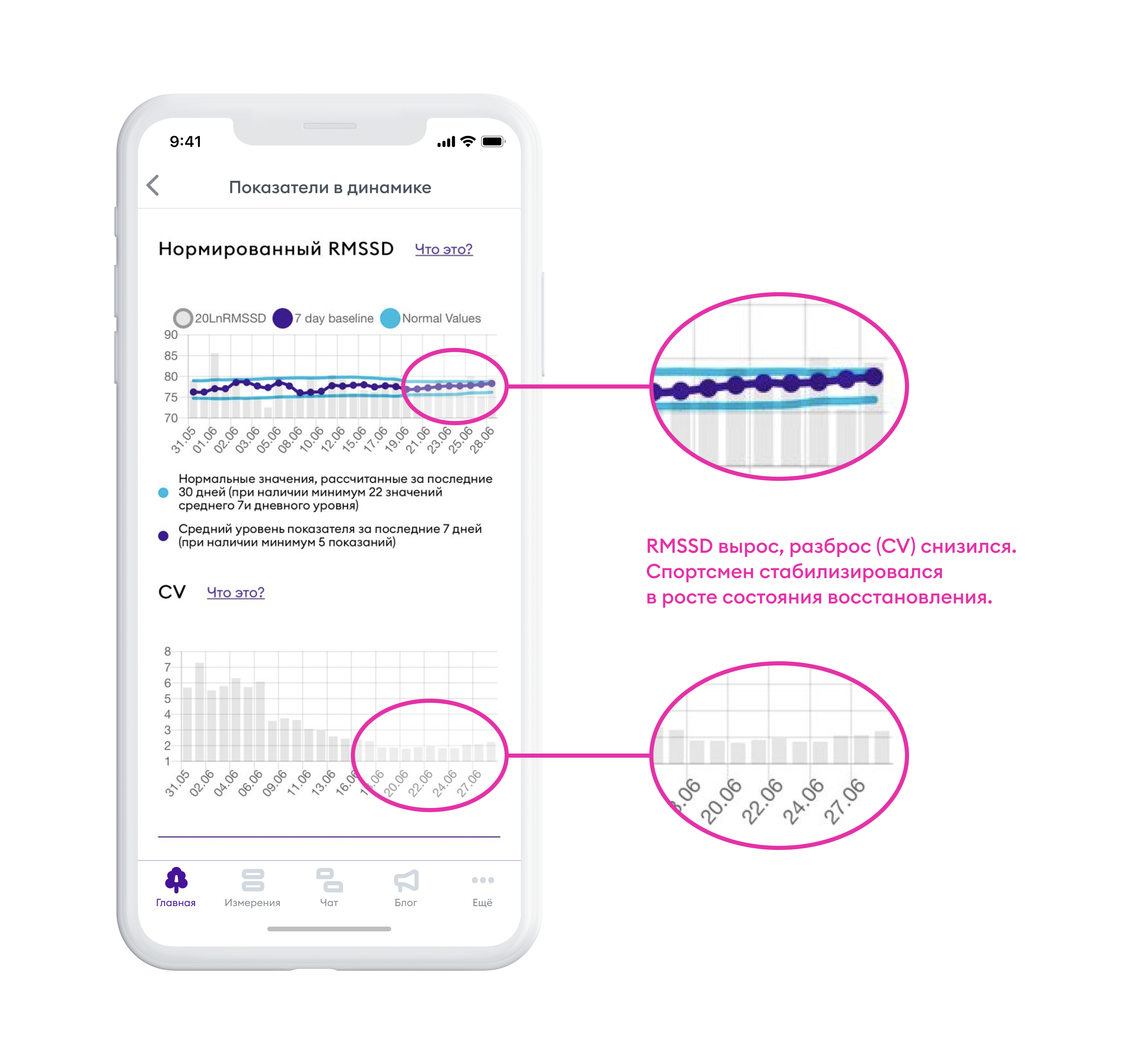 
The graphs below show the story of my preparation for the Washington DC Half Marathon on March 30, 2020, during which I ran my personal best, and the subsequent recovery.

Trend 1. With the help of Engy Health, I adjusted my workload on a daily basis according to RMSSD, VC and heart rate. The growing RMSSD trend against the background of low VC and heart rate spoke about effective load calculation, I gradually increased the load, and by March 29 I reached my peak. Unfortunately, the start was canceled due to quarantine. But I decided to run this distance anyway and successfully set a personal best.

Trend 2. From April 1 to April 10, my RMSSD scores, as expected, sagged: my body wasted resources and needed to recover. The falling 7-day RMSSD trend clearly indicated this. During this period, I first rested, then reduced the load level to the very minimum.

Trend 3. Since April 15, the body has recovered, reaching a new level of form after the half marathon. I resumed training with a "pre-marathon" level of load.

The pulse graph is also indicative: 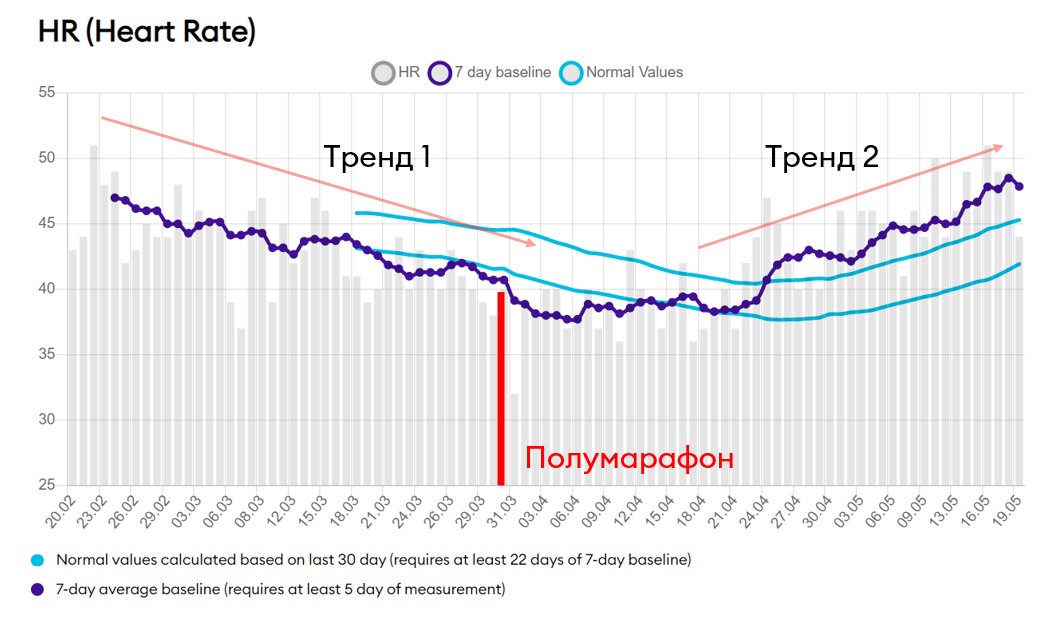 Тренд 1 By the half marathon, as part of stable training with a gradually increasing level of load, the pulse dropped, which indicated an improvement in form.

What does HRV-controlled training give?


Subscribe to our newsletter with lifehacks and master classes

We use cookies for the best presentation of the site. By continuing to use this site, you agree to our use of cookies